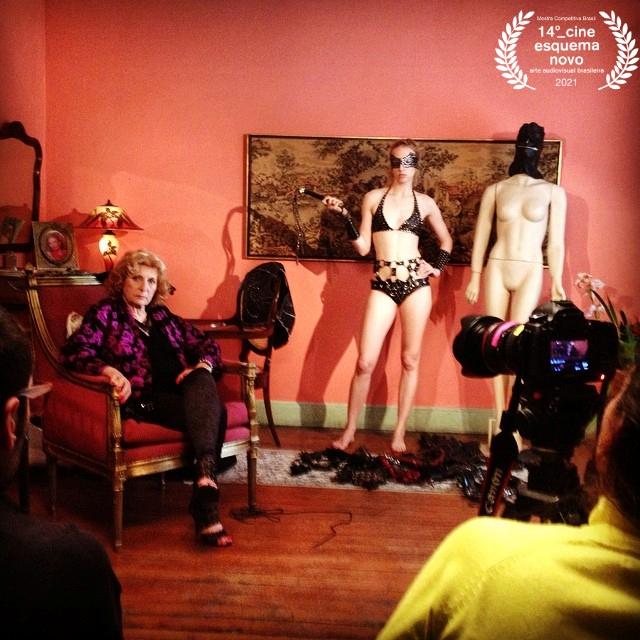 ​​​​​​​Sinopsis: Five artists – one deaf, two visually impaired, one in a wheelchair and one in danger - meet to answer questions that rummage through all the good and bad in being who they are.

I chose the film "profanAÇÃO" by Estela Lapponi because I believe that our works dialogue in many ways. Estela's film is from 2018, therefore screened after the production of "Vil, máa", but before its editing and completion in 2020. I feel that my films (the most documentary-like ones) border on the performative. I usually do not do more than one take unless it is very necessary, which many might consider as a natural part of a documentary (and the fact is that it is not, necessarily). However, my movies are generally restricted to the devices, locations, and very clear regarding time - a woman tells the stories of a night of insomnia (Corvos), a man tells the stories on Sunday boredom (Novalis), an old man wonders about who to call for the first time in a day's work (La llamada), and I think that that's the approach it in a logical relation to performance: even though the actors/characters, at times, have the dialogue written and accurate, even though the environments/locations are mostly fictional, what goes on inside these frames still seems like it is walking on a tightrope, and depending on other things, which are the result of chance. That is, within the super-controlled environment and clearly directed themes, it is inserted the space where chance necessarily fits (how the actors/characters tell their stories in those specific days, in front of that crew, or how they react to the images created by the film - Glauco “watching” me being tied up, Wilma in front of the figure of a younger blonde woman - and what kind of new information can be brought by these frictions - as when Wilma's alarm rings during the scene, reminding her that she needs to take her stress medicine, reminding us of the corporeal and finite aspect of this woman, or when we discover that Akira, Glauco's husband, who seems shy and submissive, turns out to be sarcastic and sadistic in the face of the situation. That's why I tend to think of these films as experiments, and I often do them without knowing if they will be short or feature films. I believe that Estela's film approaches mine, not only in the performative character, but in theme, and also in the way it approaches its themes. The direct way in which she shows what she wants to show, the way in which she throws light on disabled bodies, which is her own body, and how she films these people with closeness and sensuality; a sensuality that society insists on disengaging from these bodies. The way she flirts with the documentary to deny it, by asking commonplace questions that people with disabilities face every day written on everyday objects, but which are never asked to the bodies in the film. I feel that somehow, in getting closer to characters who create fictional universes for themselves, I take a similar path in my films. I document fictions, embody dreams and in profanAÇÃO, Estela fictionalizes bodies-documents and desecrates the possibility of access to a real.