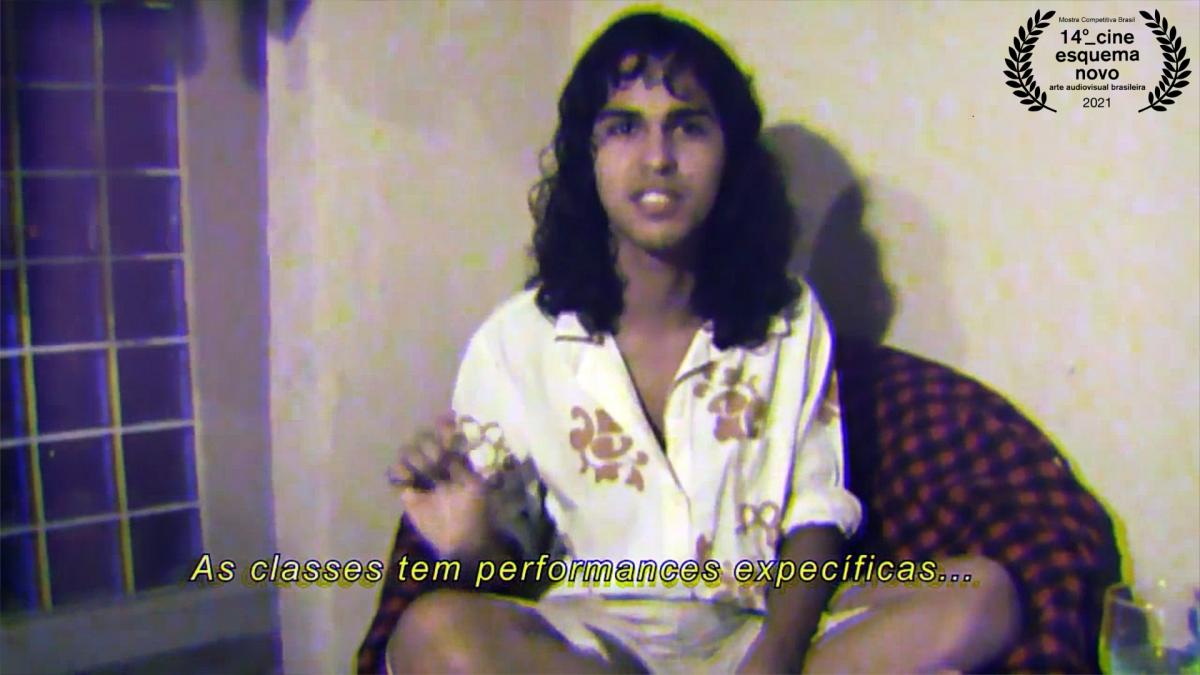 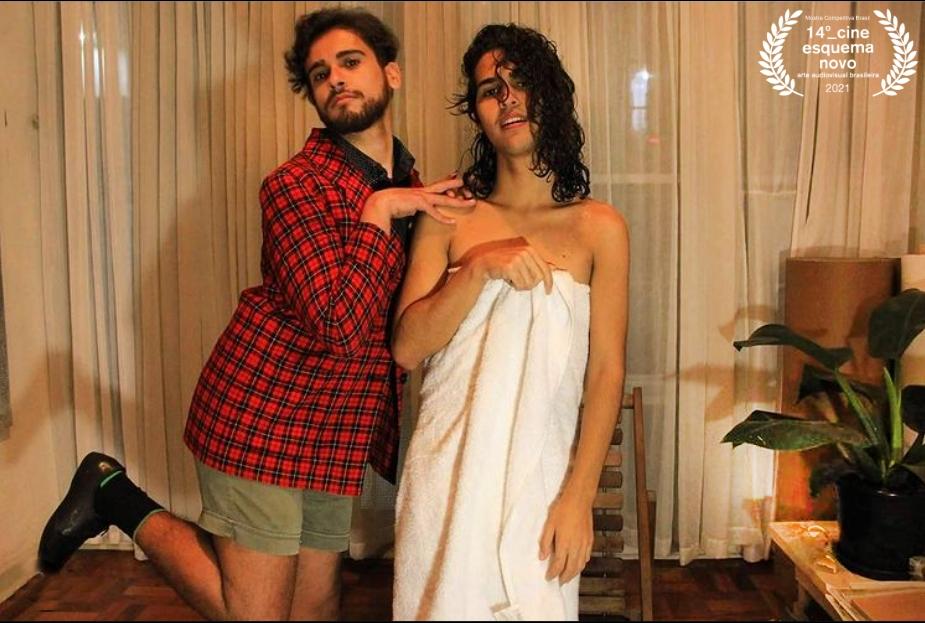 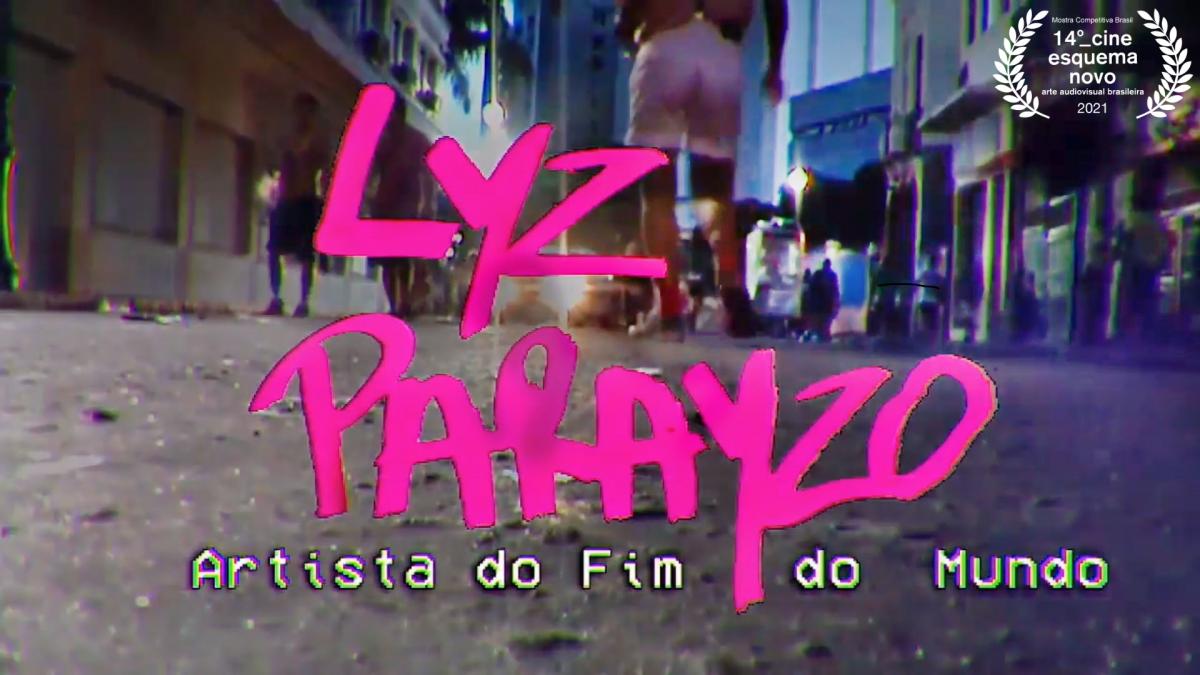 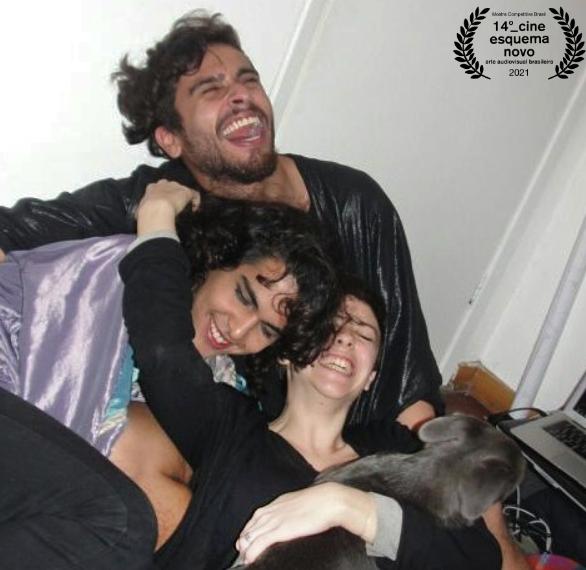 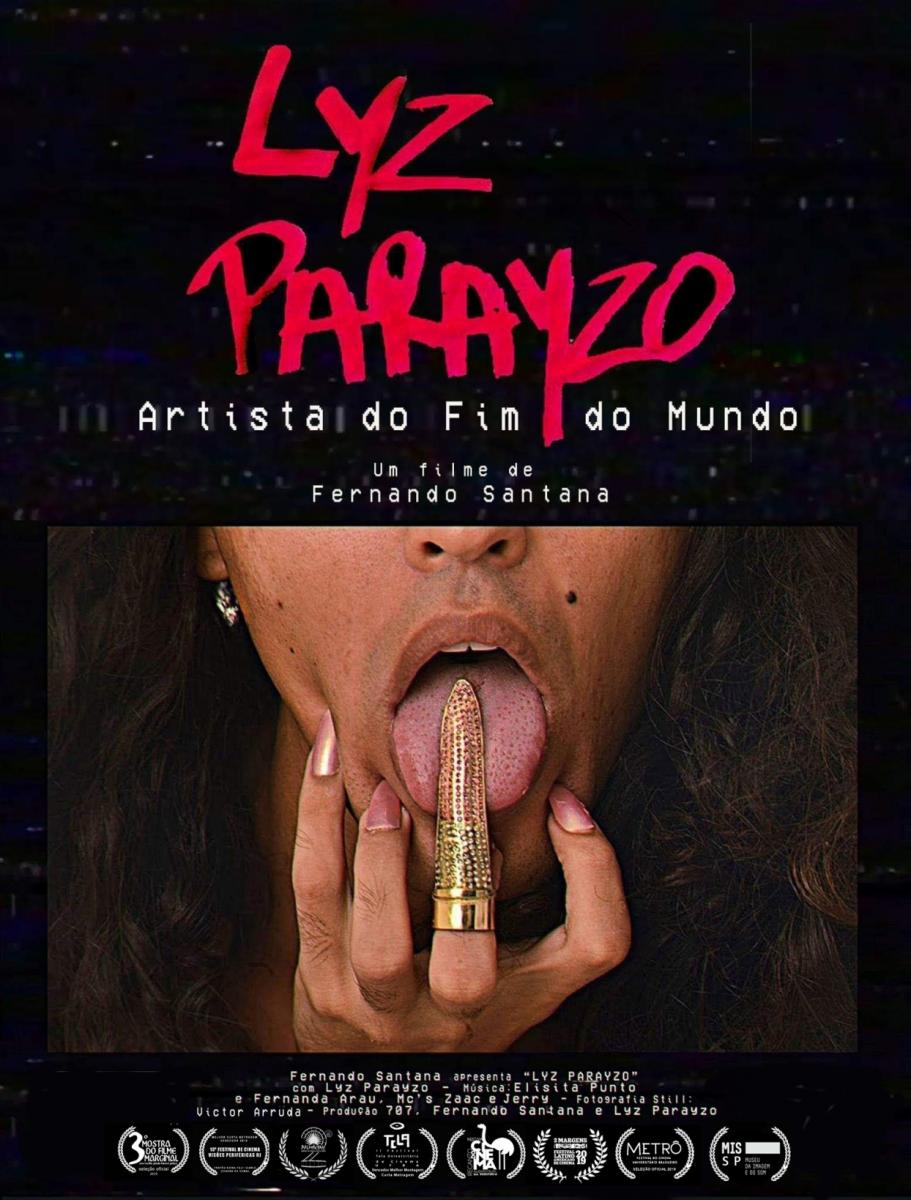 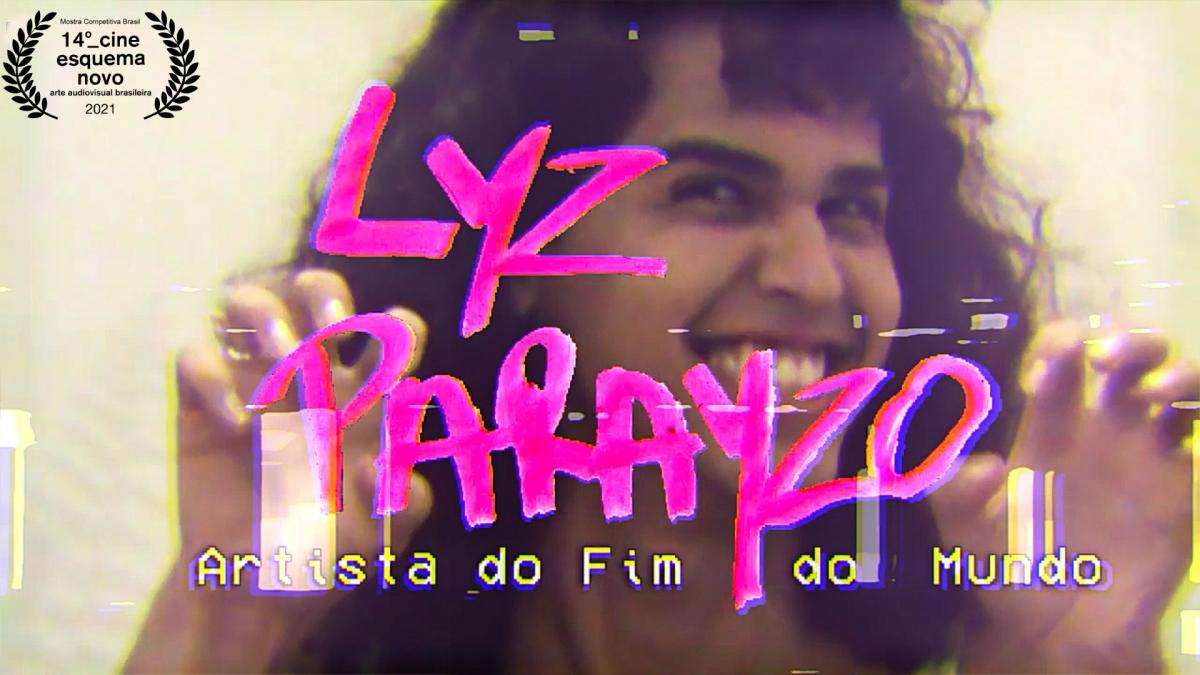 The documentary was born from records of experiences with the artist in the same studio / residence in the Lapa neighborhood, Rio de Janeiro. With an old Handycam, I was able to record several moments with Lyz and our friends, and tours through the wonderful city. I also accompanied several of the artist's actions. In the beginning, I edited the contents of the record I made of two of Lyz's works in one day during a conference at Casa França Brasil. "Unha navalha #2" and the performance on the clothing of the military police of Rio de Janeiro, "Bicha Presente". I used equipment from the late '90s. A low resolution but compact digital camera, with excellent zoom-in. With it, one can observe from afar and record many things without drawing attention.

I shared the video on social media, and Casa França requested the video, which went on to be screened next to the artist's works during the exhibition.

Nowadays more and more people are looking for clarity and resolution in cameras and mobile phones to capture perfect images, so I decided to go the other way. I valued my available possibilities and especially the power and need that this narrative had of being recorded. I began to customize and treat the images that I captured in low resolution and eternalized them in legitimate VHS tapes, which used to house old films and important events recorded commonly by families.

Speaking of families, I come from a family that, I remember my father, who is already deceased, stating that a photograph is not of value, it has no use for feeding, it is expensive and only for people who have got a lot of money. During the residency in Rio de Janeiro, I went through other places until I arrived at the university. I voluntarily sought training and participated in numerous workshops on audiovisual that instructed me to improve, so to speak, my film's cut. During Lyz's season in São Paulo, I decided to dub the film due to the original audio's poor quality. And, finally, to translate its content and subtitle it, so that the work contemplates not only the Brazilian territory, but positions itself as a film about a Latin American artist, produced by a Latin American artist, depicting a very delicate temporal cut of history. And that this material was also inclusive of people with special needs in all languages.

Still in Rio de Janeiro, faced with such sensitivity and identification with all the repertoire that came to meet my research questions, I decided to record an interview with Lyz in my backyard. At that time, she was already being invited to works, she no longer used invasion mechanisms to “be” in that space. In an intimate and unpretentious way, we listened to each other and discussed everything that was happening in our lives, about the directions and processes of her work. At the time of the interview, we realized details about how important all the content we had produced was. To discuss her sculptures and the foundations of her performances made the intentions and meanings even more prominent to me, given how works equal to Lyz's are of paramount importance in the contemporaneity of the nation that most kills LGBTQIA+ people in the planet.

I would say perhaps that unfortunately films like this needed and still need to be produced at this point in Latin American history. We live in a country of short memory that does not value its people. Directly, the film portrays contexts related to colonial processes. I've known countless and countless Lyzes out there.

I personally believe in the importance of this film as an excerpt from my personal life, where I was able to experience and live the freedom that a flawed body (as per the patriarchal society) can change its perspective of existence through the mechanisms of access to education.

ARTICLE - Plateau 2020: Afro Cinema and Protest in the Year of the Pandemic
Por P. J. Marcellino

VIDEOS FROM RAP GROUP “AS LAVADEIRAS”
Montage by Fernando Santana

As Lavadeiras is a female rap group from Mogi das Cruzes (SP) formed by Karen Dias, Sarah Key and Dj Nandes Castro which proposes to dialogue rap with the popular culture, bringing diverse themes in their songs.

Directed and montage by Fernando Santana

Justification: A false and brief documentary about the crisis of "color cutting" in the capital of Rio. A production by an artist whom I have the honor of being contemporary to, who discusses and addresses in his films relevant topics that are of my interest.

Justificativa: The documentary recorded in analog technology deals with the still unknown singer Maria Betânia's arrival in Rio de Janeiro. It presents us with a panorama of the Rio city in the 60's. The simple, unresorceful cut inspired me at the time of editing my work.

Sinopsis: A dive into sex identity and its implications from external expectations of how each individual should fulfill their role in a society guided by compulsory heteronormativity.

Justification: I met Joâo Eduardo in an audiovisual workshop with several people from Brazilian states and cities of Portugal. We had similar interests regarding what to express through a screen, and we had the opportunity to produce this film. It is composed of images of highly toxic, transphobic, and misogynistic content that are scattered on the internet outside. It brings reflection of misrepresented beliefs and values that describe characteristics of not only Latin American, but specifically Brazilian society, due to the political events of the last decade. The film permeates the same atmosphere as Lyz Parayzo's. It is not a documentary, it is not about the life of a dissident body in itself. It is about an entire prejudiced story that has its roots in colonial times and is also spread over the internet today. It is about content with unsubstantiated theories conveyed by authorities related to various Christian churches that simply spread hatred, loathing, and prejudice against the LGBTQIA+ community.

Justification: Tertuliana Lustosa used to sell Brigadeiro candy on the beach in Salvador, Bahia. She went to Rio de Janeiro to study art history and work as a DJ. Her work inspires me as a dissident body acting politically in artistic and academic spaces.

Sinopsis: The film-essay follows the four years of university of an anonymous character through the entries in her diary -- the narrative talks about identity construction, modern times, and femininity. "Vir-a-Ser" ["Coming-to-be”] mixes the domains of documentary, fiction and experimental in order to express the thoughts and experiences of coming-to-be a woman, portraying the process between adolescence and adulthood.

"Vir-a-Ser" is a film that made tearful, moved me, and influenced a lot in the production of my last short film. It dialogues with many of the sensibilities that permeate subjects of my interest about what I research. I watched it before I met its author. Bianca Rego is an independent artist like me, and she is also from Mogi das Cruzes, she's my compatriot.

The film has the participation of artists from the region where I was born, which I admire and are worth mentioning, such as Lethicia Galo and Milena Pimentel, who contributed with images and were part of the technical crew. And the performance by Corpus Vulcânico / Narany Mireya. The short was edited with such care. Almost like an outfit tailored with emotions through the screen.

I met the artist virtually, during the pandemic; a tactless contact. However, our emotions connect in the mutual admiration between our works and in the power of a purpose that they represent in a social body that is larger than we can imagine.