TV Coragem, a curatorial program coordinated by Lorran Dias and commissioned by the program IMS Invida

Semana Semana, in the edition curated by Keyna Eleisson of the program held by Semana de Cinema in 2020 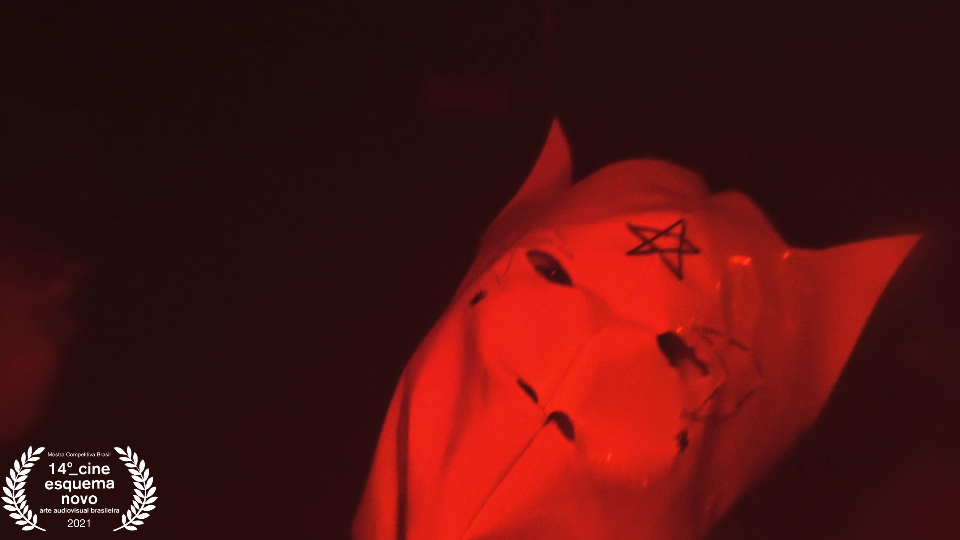 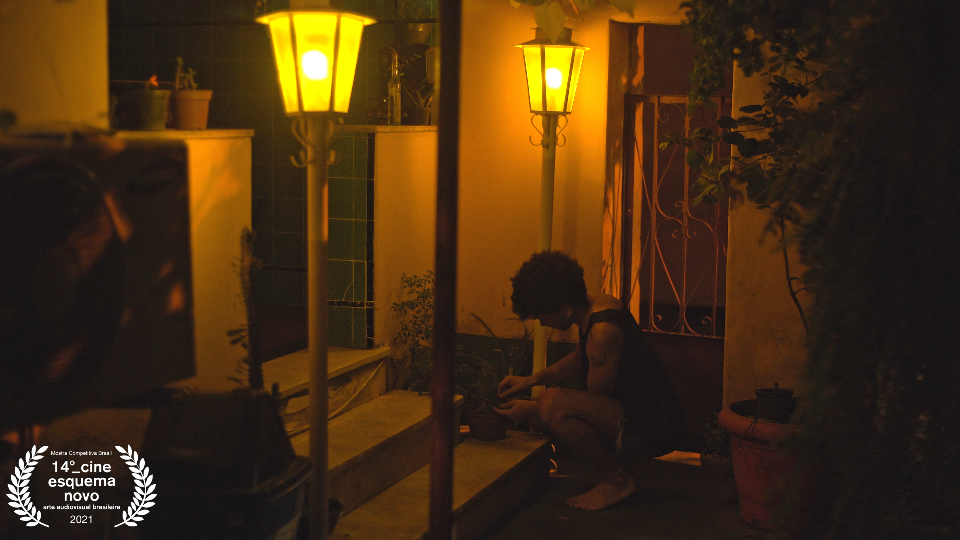 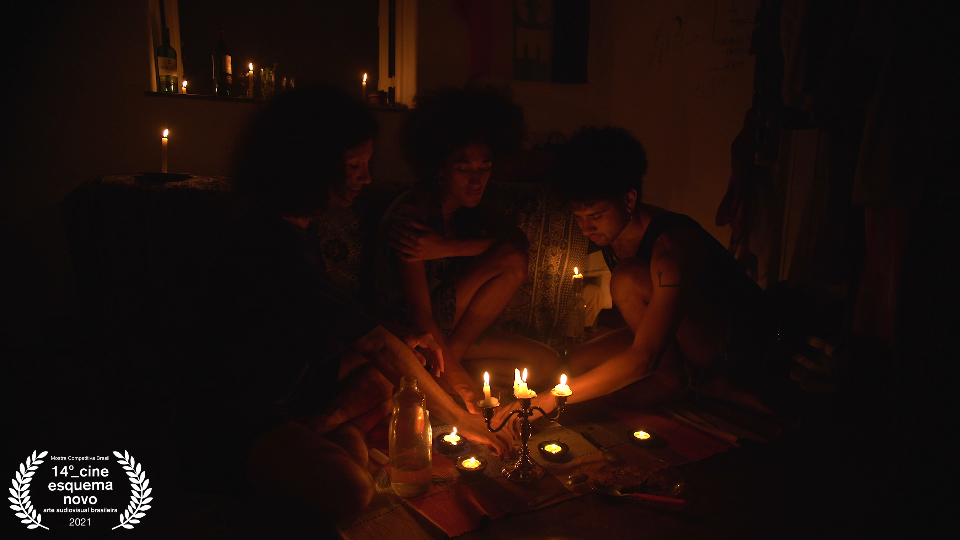 I believe that memory only becomes political if its production is collective and continued. That is why this film, which arises from the appearance of a memory between friends, is just another point of a network that is being woven far beyond ourselves. More than bodies, fabrics, images or sounds, the main support of this film is friendship. It is friendship that teaches us, every day, to cope with the paradoxical and unsolvable task of bearing the unbearable. It is between friends that we light the fire of preparation of food, change clothes, and learn to dance.

The first name we gave the film was “Barriga cheia de imagens” / "belly full of images". I happened to be cooking with Sabine and Anis when they got an invitation to perform with Arda and then the idea came up for me to film it. We ate, played Tarot to activate memories and possible paths of actions, and slept there, in Sabine's room. In the middle of the morning, she woke me up and said, “girl, your belly is full of images.” I was startled. The next day, I woke up convinced that this was the final name of the film that would be shot the following week and that I was far from being able to imagine.

I went down the slope of Morro da Conceição with the lightweight and joyful curiosity of those who carry part of a child.

To this day, Anis does not forgive me for changing the name of the film, which, among us friends, continues to be called “belly”. I like that nickname -- or first name -- because the belly is a place of processing the vital and invisible energies that sustain our body. But I especially like it because that day the belly was full of a food made together, just like the one we ate in the same kitchen a week later, when it was also our set.

The name Matheusa Passareli was only evoked by Sabine at the time of filming. However, I have no doubt that she already went through the whole process as an invisible force. In the same way, she appears, directly or indirectly, in the works of many who fight for her memory, with whom this film dialogues directly. I would like to briefly mention some of the works that make up this memory effort. One of them was the event Noite estranha: cuidado, convivência, agência, held at espaço de arte Despina, in Rio de Janeiro in 2018. The curators Sabine Passareli, Clarissa Ribeiro, Marta Supernova and

Lorran Dias describe the meeting as "an act-intervention in dialogue with the life, work and poetics of Matheusa Passareli, black and non-binary artist murdered at the age of 21 in Rio de Janeiro in April 2018”. Records of that night can be found on Despina's website ( http://despina.org/noite-estranha-cuidado-convivencia-agencia/ ). In addition to a series of tributes, works by Matheusa were exhibited there, such as the sculptures called Corpos Estranhos (2017), available for the audience to touch. I also highlight the work Atrás do muro / behind the wall (tribute to Matheusa Passareli), by Tadaskia, who made the graphic art and poster of our film. The record can be found in her portfolio (https://www.tadaskia.com/portf%C3%B3lio , on pg 112). In the artist's notebook, I further present Sabine's works, in which the memory of her sister appears more strongly. As for the cinematographic references, "Fazemos da memória nossas roupas" emerged when I was in love with Chantal Akerman and Pedro Costa, in addition to being directly contaminated by Anarca Filmes's production. Chantal was interested in the production closest to the documentary. In her films, the composition of the rarefied and long-lasting shots tire the sight of the visible and open the attention to the evocation of memory and the invisible layers inscribed in the landscapes. I hope I have left enough time for us viewers to detach somewhat from what they saw more immediately and access memories both triggered by the people on the scene, as by the walls, objects or clothes. From Pedro Costa, I hope to have approached what I perceive to be an ethic of distancing. When we filmed, in 2018, I had fresh in my mind his essay “Uma porta fechada que nos deixa imaginar” in which he reinforced the refusal of the attempt to provide viewers with an experience of identification with the characters. For him, when identification happens, viewers stop looking effectively for the filmed people and begin to see themselves in the situations. Maybe that's why I chose to shoot such hard and distant shots. I wanted the viewer to never forget the irreducible singularities of the people on the scene so as to establish not a direct identification, but an implied relationship with these lives. Perhaps, thus, the viewers can be a bit like the girlfriends as they build conversations from their distances and differences. Finally, I would like to highlight the connection of the making of the film with the broader process of the ANTI project: Anti-Fascist film residency, held in 2018 by the collective Anarca Filmes in the Saracvra space in Rio de Janeiro. The collective aims at creating a field of production and enjoyment for films outside the traditional cinema circuits. Thus, they involve in their productions gender disobedient people from different fields of Art, different professional activities and social classes, enabling a space of coexistence for these individuals that transcends filmmaking. Because they started with LGBTQI + parties as the main spaces for the dissemination of their works, their aesthetics are very marked by the sonority and performativities of these spaces.

During one-month of the ANTI artistic residency, the collective made eight short films. The processes had the participation of members of the collective, students who enrolled in a workshop taught by them, but also children who lived in communities near the port area of the city, people living in the streets, as well as friends and acquaintances from many places in Rio and its surroundings. All the films were screened at a closing party that also featured performances that involved everyone, exploring smells, experimental sounds that were attuned to the resonance of vibrations in the bodies, and other procedures that changed the traditional relationship of viewers with films. "Fazemos da memória nossas roupas" was made in this context of conviviality and had its first screening (the cut was yet to be improved) in this closing party. 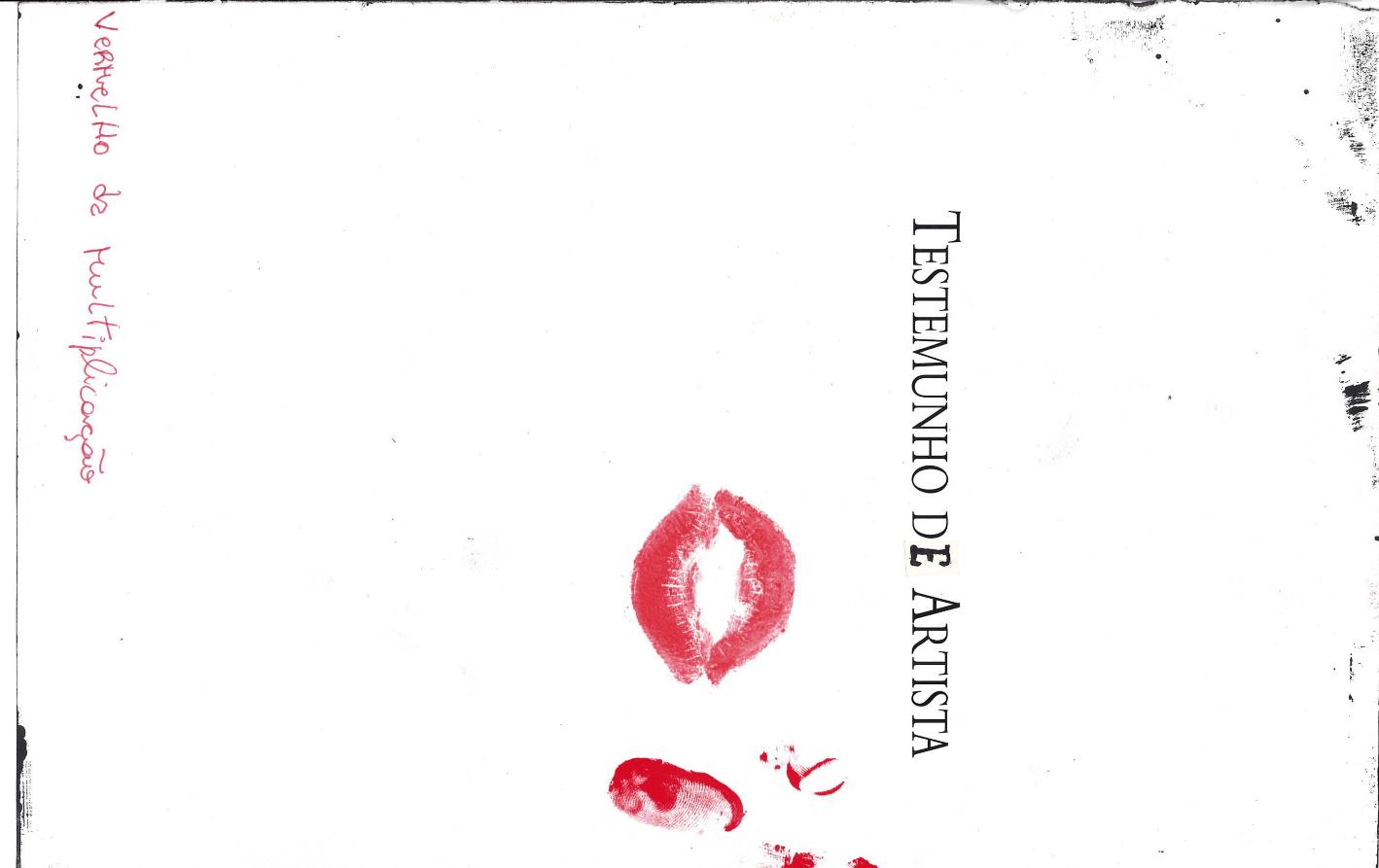 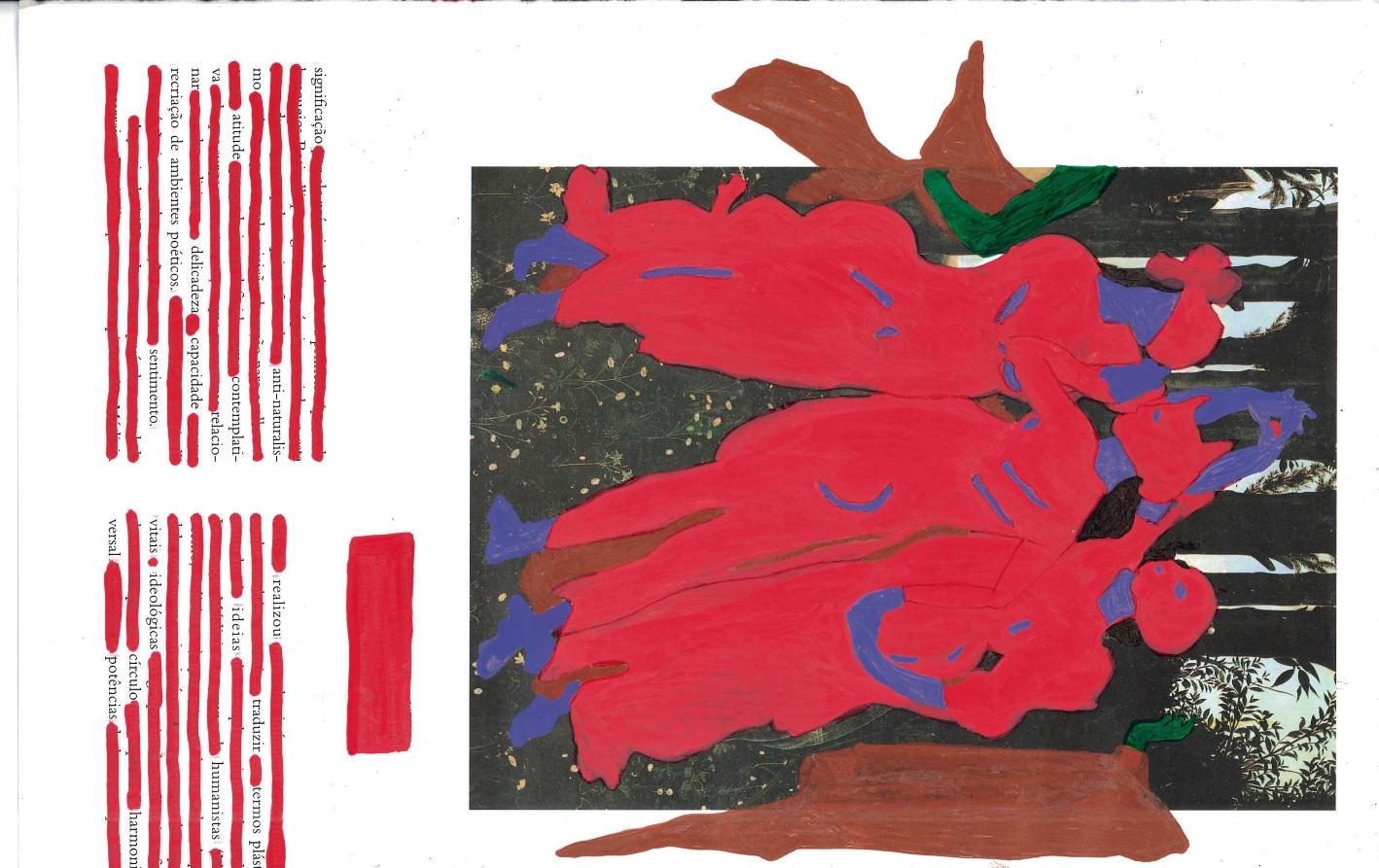 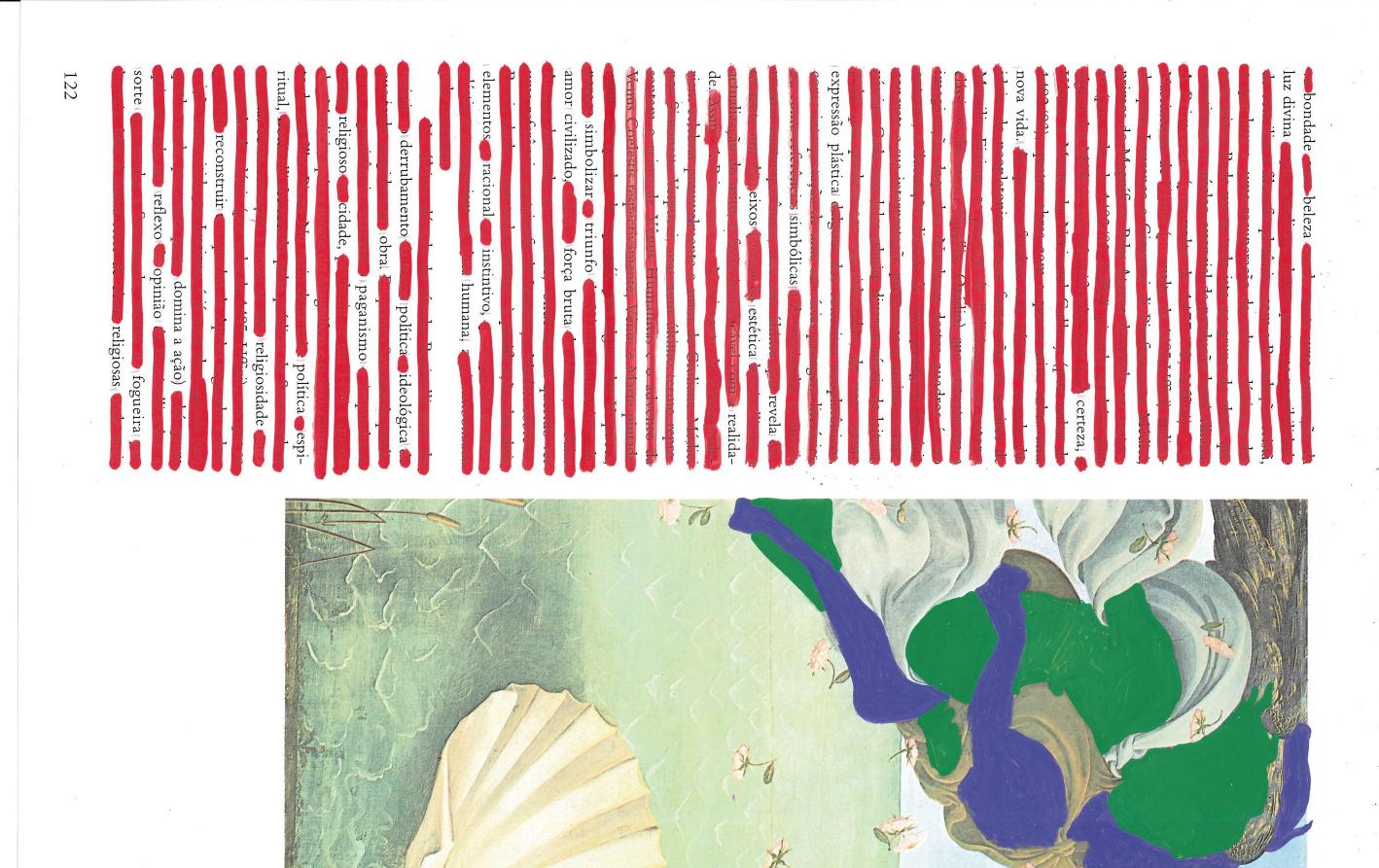 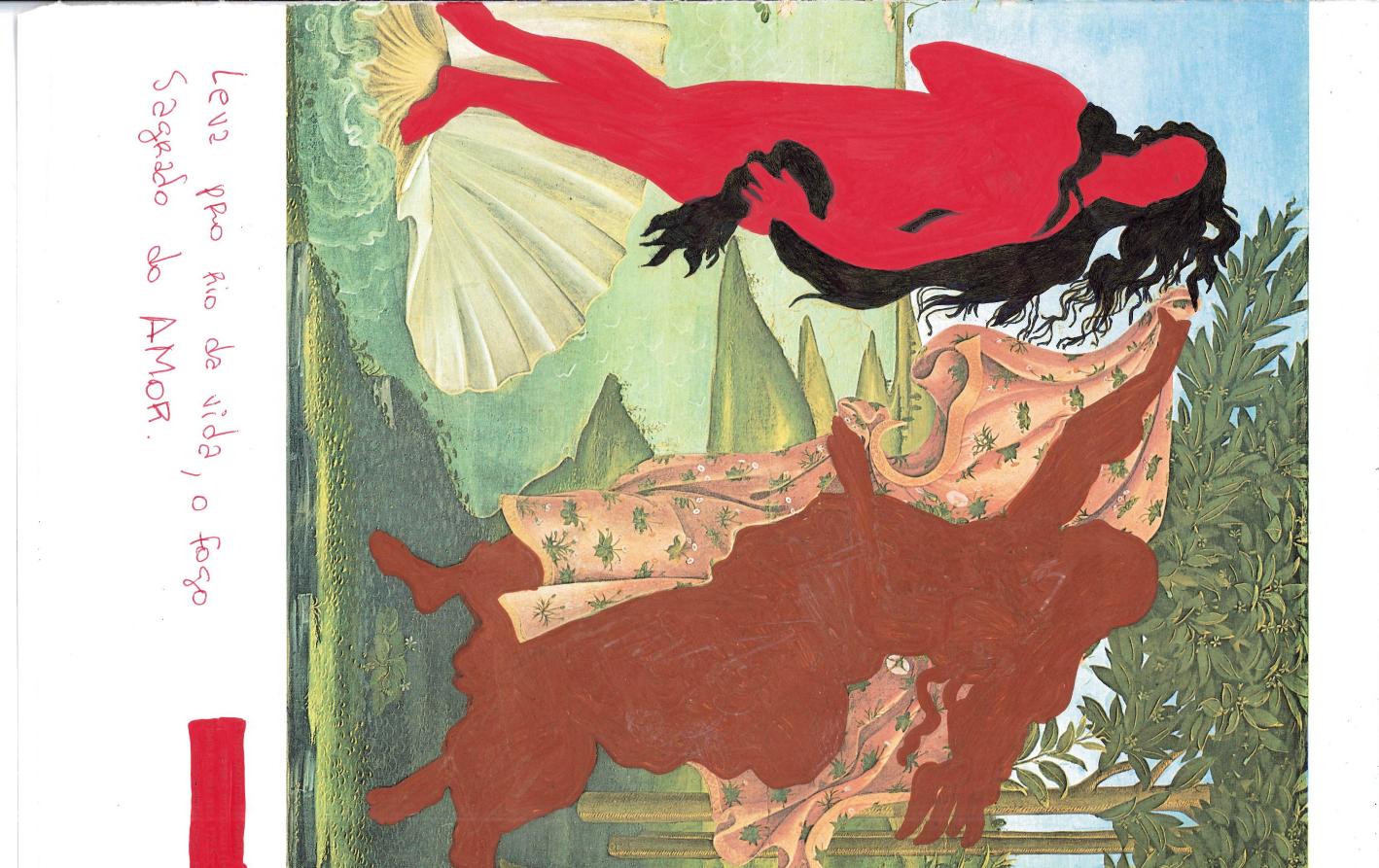 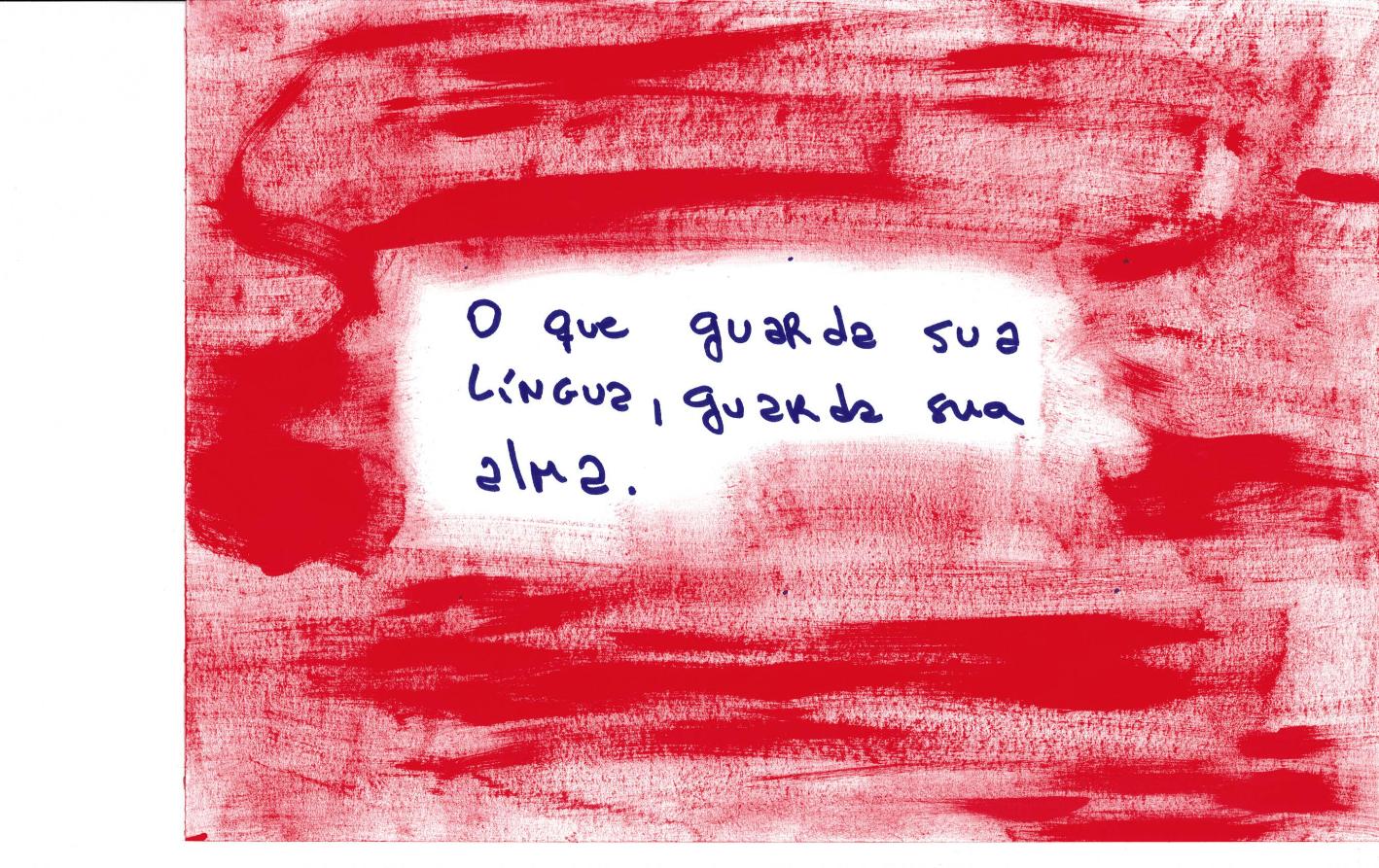 Justification: I chose to work with the works of the people in the film, since they are all artists and I consider "Fazemos" a rendezvous of our poetics.

Already on the first page of her artist's book, Arda prints a mouth with lipstick on and writes "red of multiplication". In the following pages, the color red paints, blurs, and deforms bodies depicted in canonical images of European painting of the Renaissance period.

She speaks of a" sacred fire of love", perhaps this fire that transforms, but does not kill, dialogues with the fire that, in the film, serves to cook and illuminate the tarot.

(Records by Chema R. A. (@polksnan) and the action took place in 2019 at The Fruitmarket Gallery in Endinburg)

Justification: I chose to work with the works of the people in the film, since they are all artists and I consider "Fazemos da memória nossas roupas" a rendezvous of our poetics.

I was sent records of the "Como sugerir detalhes?" performance by Sabine. In this work, she condemns the brutal murder of her sister and wonders, in 2019, what art can do for us so we can “keep breathing”. By thinking about breathing, Sabine articulates the aesthetic experience to a vital demand. I believe that Sabine's performances have the desire to immerse themselves in our lives; they are like tools for practices of elaboration of collective memories and care. Thus, Sabine's works extrapolate the strict field of art institutions and resist being finished in the presented products.

In  "Como sugerir detalhes?" ["How to suggest details?"], Sabine returns to gestures and elements already triggered in our film. In the film, the fire, which appears in the performance in the incense and leaves scars on her hands, is used to finish the red mask, burned at the tips.

Justification: I chose to work with the works of the people in the film, since they are all artists and I consider "Fazemos" a rendezvous of our poetics.

I asked Anis to exhibit the performance "Carga Indumento", performed by her in partnership with Sumé Aguiar. The clothes they wear blend with fabrics that recompose the possibilities of transit in space. At first glance, the cloths seem to hold them down. In fact, they turn out to do the opposite: when one is the support of the other, they become as mobile and light as the smoke of the incenses blowing in the air. Weight ceases to be an impediment to movement when articulated with another body.

"Cargo Indumento" refers, with blunt force, to the force of collectivity expressed in the film. The performance also resumes the investment in clothing as a field of experimentation.

Sinopsis: Sabine films the house in Rio Bonito where she was raised with her sister. In the soundtrack, we hear Matheusa's voice evoking her presence in that space.

The film "Fazemos da memória nossas roupas" evokes the memories of Matheusa Passareli from her absence. Already in"Luz, Matheusa, Sabine, Salaciona Passareli" we are allowed access to her presence through her voice. I consider this film an important complement to "Fazemos" to enter into its affective and political universe, especially taking into account that it is Sabine's perspective, who is a central figure in "Fazemos".